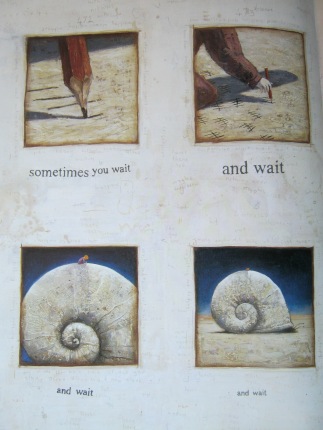 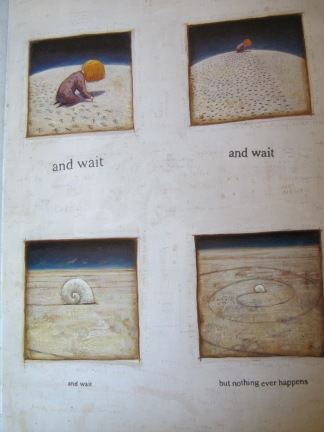 From ‘The Red Tree’ by Shaun Tan

Have you ever played Hearts?

It’s a card game. For our purposes, the important part is this: every card in the heart suit is worth points, and (just like golf) players want to avoid those points.

I played a lot of Hearts as a kid, and I was awful at it. As the tricks trickled by my pile of points would grow more and more daunting. I couldn’t seem to wrap my head around the normal strategies, but there was a last-ditch thing that I really liked. If things start to go bad in this game, if you’ve gotten to the stage where, no matter how you proceed, you’re probably sunk, you can Shoot for the Moon.

What this means is that you embrace the situation. Instead of avoiding the points, you turn around and chase them. If you succeed, if you collect every single card in the Hearts suit, you Shoot the Moon. The penalties don’t stick to you. Instead the other players in the game get twenty-six points apiece and you come out clean.

I think I thought I could do that here.

The week after I reported, my neighbour stopped me in the street to ask why the cops had been outside my house so much lately. I muttered something evasive and shuffled away, but it felt pathetic. People were going to keep asking. I knew that these things could take years – I wasn’t sure if I could hide it, could avoid discovery and shame and recrimination. I wasn’t sure what hiding it would do to me.

This blog was the grand gesture that was supposed to make it…not better, but at least under my control. I thought that by turning around and embracing the discovery, I could transfer the baggage – the shame and the recrimination – onto society and walk away empty handed.

I forgot how much I suck at Hearts.

I forgot that I tend to overestimate my emotional resilience, that if biting off more than you can chew was an Olympic sport I’d be heading to Rio this summer.

Basically, I was wrong. I expected this to be worse than I expected, and the phenomenal shittiness of it still took me by surprise. The past seven months have cost me more (in tears, in vomit, in time, in sanity) than I was prepared for.

When Katheryn Borel stood on the courthouse steps and told us all that there was no point moving forward with her case against Ghomeshi, I felt a cold, furious triumph. Not because she’d won – she clearly hadn’t done that – but because she’d looked the horrible, unwinnable game in the face and told it, “no”. No, it’s not worth it. No, I won’t play.

And she didn’t slink away, either. She stood there with her hair blowing around in front of all those cameras, and she spoke clearly and emphatically.

If you’re like me, you thought of reporting sexual assault as a single, unpleasant event. You go to the cops, you make a statement, you wait for the trial. During these seven months I’ve had between six and eight (I haven’t been journaling, so I’m not sure of the exact number) interviews with the police. Most of these were unannounced evening visits to my house. The officer would show up, be roared at by my dog, watch me make tea neither of us would drink. “Start at the beginning,” he’d say, “in as much detail as possible.”

And I’d clutch my mug of tea and talk.

“Can you remember anything distinctive about his voice?” the officer would ask. “His hands? What colour are his eyes, and what’s the make of his car?”

But the details I remember are not the details anyone wants to hear. I remember the way his hands felt under my armpits as he hauled me up from the floor (I remember it every time I see a man pick up my nephews). I can tell you about the weight of him on my chest as he said, “I like the way you look with tears in your eyes.”

Despite the patience and understanding of the officer I talked to, all of our interviews drove me (helplessly, wretchedly, self-loathingly) to tears. Only two made me cry so hard that I threw up.

I spent one cold spring day wandering around my hometown trying to find someone to take pictures of the three month old bruises on my bum: At the hospital I told the whole story to the receptionist and three separate nurses before seeing a doctor, who told me that too much time had passed for them to be involved. “Would you like me to look at them?” the doctor asked me.

At the police station the sole officer in the building told me apologetically that there were no female officers on duty that day. “It wouldn’t exactly be appropriate for me to ask you to drop your pants here,” he said.

I went home feeling like a misguided exhibitionist and an idiot, and the pictures never got taken.

I spent one beautiful summer day copy-and-pasting flirtatious old emails to give to the police (a process that was as horrible as it was humiliating and also made me want to vomit).

They aren’t ever going to give me back my flash drive.

Or my gas money.

Or my grandmother’s peace of mind.

There’s something about this process that makes me petty.

Because during these seven expensive months?

The man who assaulted me has had zero surprise evening visits from the police.

He has not had to answer questions from his neighbours. Or the receptionist at the hospital, three nurses (any nurses) or a doctor.

He has had zero scheduled visits with the police, which means that he has never curled in the fetal position in the corner of a library hyperventilating because he cannot face talking to them again. He hasn’t actually had to talk to the police at all. He has not received one single phone call, email, smoke signal, text message, or telepathic communication from anybody in authority concerning the thing he did.

These facts make me worse than petty: they make me crazy.

There’s a warrant out for his arrest, which is valid only in the Yukon. To the best of my understanding, warrants are extended to the rest of Canada only when harassment is ongoing.

What this means to me is that a man can beat me to unconsciousness and do all manner of non-consensual things to me, as long as he goes right home afterwards and doesn’t call me.

Tell me again that women should report sexual assault.

Look me in the eye and tell me that our collective idealism about the criminal justice system is worth the price I’m paying. Because from where I’m standing, it’s a whole lot more inconvenient to report a sexual assault than it is to be accused of one.

Last night I read the  open letter the victim in the Stanford case wrote to the man who assaulted her.  I didn’t feel triumphant reading it; it made me sad and tired.  I have so much admiration for that woman, who in that letter calls herself a lighthouse, tells us to keep fighting.  I cried when I read it.  Not because she won (what kind of victory was it, in the end?) but because she refused to be silent about the cost. Unlike Borel, the unnamed woman who wrote that letter did think that the game was worth playing.  That’s a harder thing to hear, and that woman is one of the few people I am willing to hear it from.

I don’t have the answer. I don’t know if I’m glad or miserable that I reported my assault (although I’m glad to be writing about it). I do know that the people who were most vocal about my responsibility in this situation were the people with the least understanding of what it would be like.

What I think is that when we tell a woman about her duty in the aftermath of a sexual assault, we’re not only underestimating the toll that duty will take on her and overestimating the result of her actions: we’re placing that burden in entirely the wrong place.

What I think is that it is not the job of women like Katheryn Borel, like the Stanford case victim, like me, to protect society from rapists. It is the job of society to protect us.

What I think is that this game is harder than Hearts.  I can tell you the various ways to lose, but like the unnamed Stanford woman wrote, “Nobody wins.”